the last time I shot on film

McCann Ericsson called asking if I still had a 10”x 8” film camera as they had a campaign to shoot that required the highest quality image.I did.Even though I had “gone digital” a couple of years earlier, I still had an extensive collection of film camera systems, from Sinar large format 10”x 8” and 5”x 4” cameras, Hasselblad medium format right down to Canon 35mm – all with a massive range of lenses and accessories.Although you could produce a much higher quality image from film cameras, even when in the relative infancy of digital imaging, the speed, convenience and cost overshadowed the quality issues… and everything, almost overnight, “had” to be shot digitally.I remember a conversation with an agency art buyer where I suggested a particular campaign should be shot on film for obviously higher quality and for its analog, living, organic look/feel.I was told, “No, we only have things shot digital now Phil”.The shoot the client commissioned was to be used as window displays for the largest high street/shopping mall sport’s retailers – and the final project needed to coincide with the upcoming football World Cup.The end product was to be a six foot tall foosball (table football) player on a rod that staff dressed in the jerseys of whichever team was playing that day. As the figures would be closely examined in the shop window, they had to have the highest quality photography and printing.To get the detail that we needed at the finished size we couldn’t photograph a normal, “run of the mill’ foosball player – they are only 7cm tall and, when examined closely are full of pock marks, dimples and rough moulding edges. Apart from all that – the better ones always have a “kit colour” . We needed ours to be neutral for obvious reasons.So we decided to have a model made which I could photograph.Phil at Creative Service Industries was visited and asked to create the model to the specification I provided (a quick felt-tip drawing I’d done, culled from internet references) of a 460mm table football player of generic appearance, mounted on a chrome rod.Later in the week I picked up what was a flawless model of a foosball player… of generic appearance… mounted on a chrome rod.The huge 10”x 8” Sinar camera and the Polaroid 10”x 8” processor were brought out of retirement for their final hurrah (at the time I didn’t realise this sad fact) and, using a can of ‘Dust Off’ and polish, they were cleaned and shined up.The 10”x 8” E6 film and Polaroid were purchased and the photography started. The model and chrome bar were lit from above to match the shop lighting that would be the final home for the finished display.Polaroids were shot as reference for film exposure, lighting, focus and composition (10”x8” Polaroids were super accurate for this). I’d make quick notes on them about exposure values (as seen below on the foosball Polaroids), notes for the processing labs and general observations.After the perfect Polaroid was taken and examined, 10”x 8” film was loaded into the camera, exposed and sent off to the labs, to be returned two hours later, checked and finally delivered to the client.The two 10″x 8″ Polaroids below are the last ones I ever shot; the accompanying film was the last time I pressed the shutter on a 10”x 8” camera… and was also the last time I shot on film (commercially). 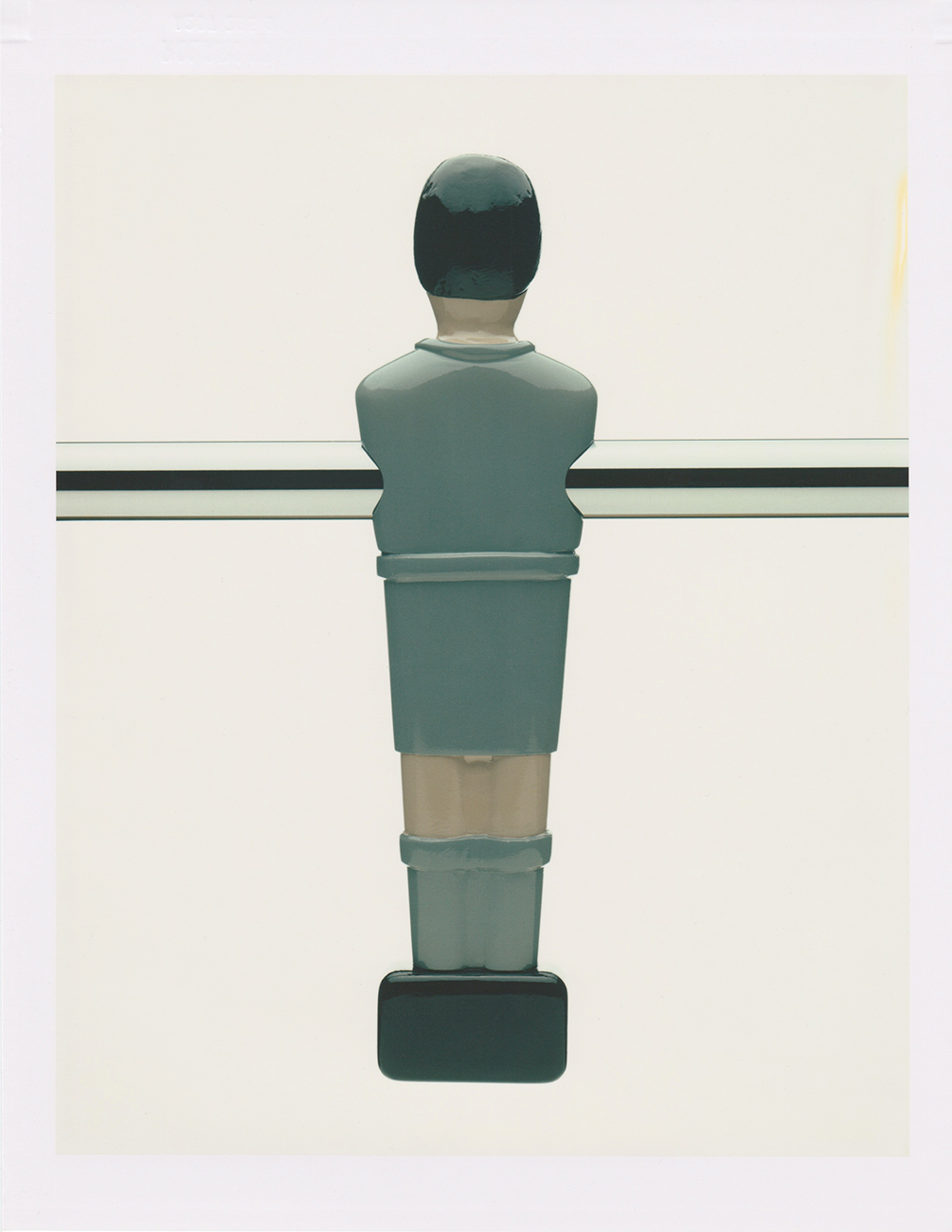