mosquito portraitI had a client call and said he needed an image of a mosquito and asked if I could shoot that for him.I answered yes, no problem, I’ll get a macr… – “no”, he interrupted I need a portrait of a mosquito, not just an image of the whole insect.This was a totally different scenario, a full face portrait of a mosquito required much more sophisticated equipment than just a macro lens set up. It needed me to get hold of a Scanning Electron Microscope (SEM), a subject I owned several books on and had studied since being a kid, so the opportunity to use one for the first time was intriguing.Having acquired several female (only the females bite humans) Anopheles mosquitos and a SEM, it was time to start the shoot.For a SEM to ‘see’ the mosquito to be photographed, the specimen has to be electronically conductive, so it has an ultra thin coat of gold applied to it – and it’s then placed in a vacuum.The vacuum in the SEM at first caused me problems, as the hundreds of ommatidia that make up the two compound eyes collapsed (looking like crushed table tennis balls) due to the pressure. After experimenting for a couple of days I was able to keep the eyes from being crushed, so then the process of lighting and positioning the subject was the final stage of the shoot.On system I retouched a few missing ‘hairs’ from her head and, as mosquitos in reality are all grey in colour, I added a hint of colour to the eyes and proboscis. 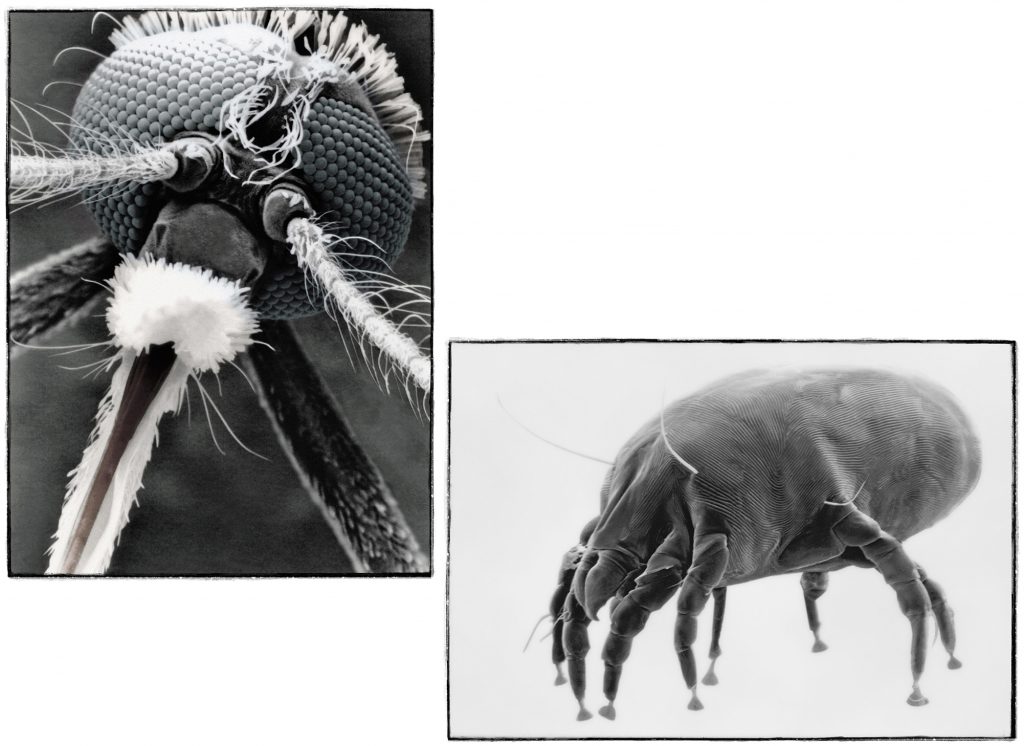 dust miteI was contacted by an agency who’d seen my mosquito portrait. They had a client, BAXI, who needed a shot of a dust mite for a new product launch and they asked if I could shoot a complete dust mite as a cut-out for them.As I’d just shot the mosquito I agreed. I obtained a few dust mites and set about the same process as before.This time the vacuum in the SEM collapsed the whole body of the dust mite and, after looking at several reference images of them in books etc., I realised that that was how they were usually pictured… all collapsed – when in reality (not in a vacuum) they are shaped like an inflated balloon.So I had to work out how to achieve a more realistic image of one where it’s not all shrivelled in appearance.Again after experimenting for a couple of days, I was able to photograph them as they actually look, and not, as usually shown, all shrivelled up like a date. 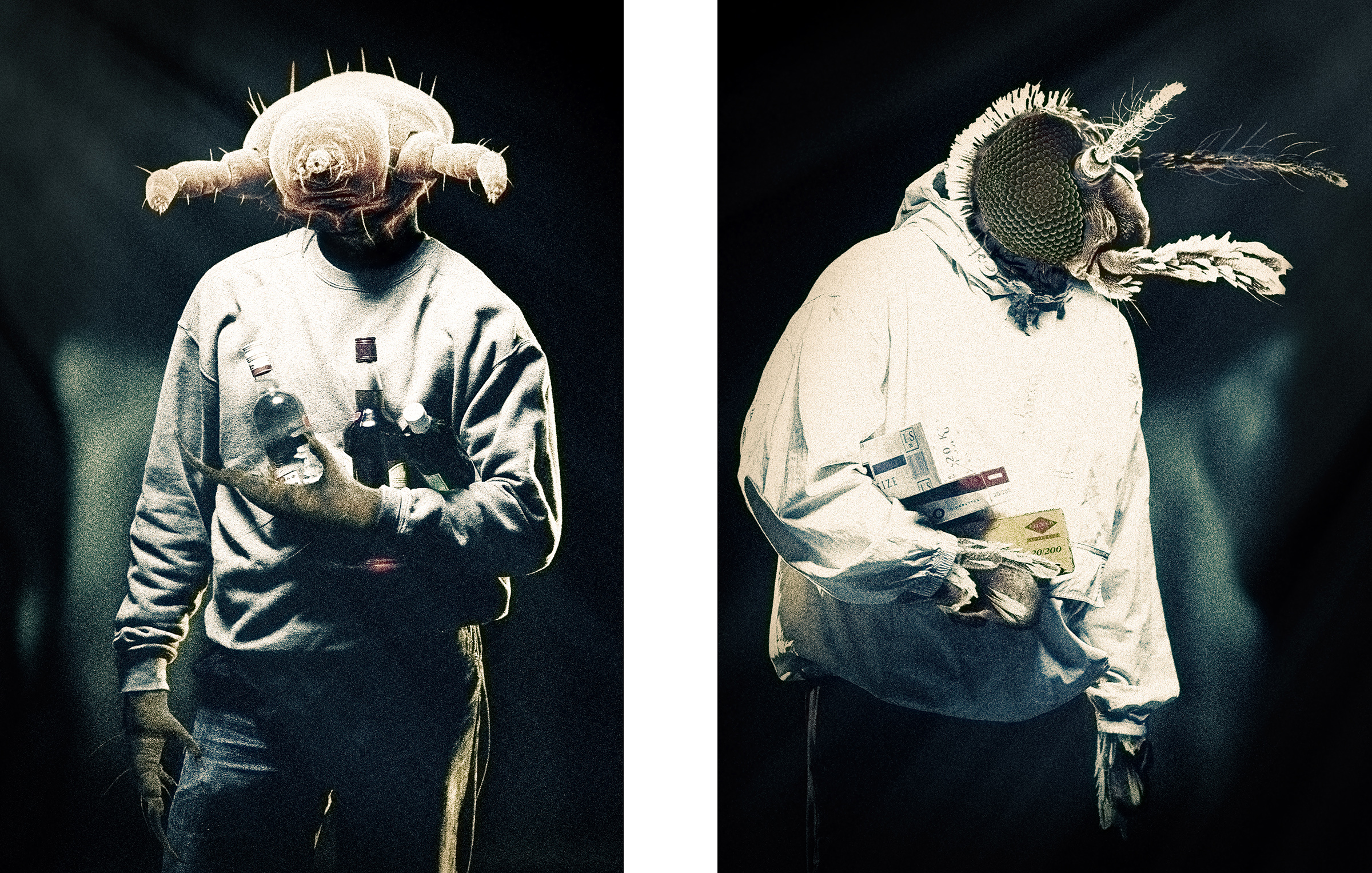 parasite and louseHM Customs and Excise needed three images for their campaign against contraband smugglers – two of the images would require the use of a Scanning Electron Microscope.First of all the human models were shot in the studio on a neutral dark background holding their illegal goods.The alcohol smuggler, carrying bottles of spirits under his arm, was a “louse”, therefore had the head of a louse.The first SEM part of the project again was to purchase the subjects, body lice, and as they had travelled up from London to Manchester, when they arrived they needed feeding. I placed exactly 100 of them on my arm (I counted them all out and I counted them all back) and let them feed.In their unfed state they looked like specks of grey dust, but as they fed on me they expanded into what looked like small red berries and after 20 minutes or so dropped off my arm back into their container. After photographing them in the SEM the images were loaded onto system and the retouching process began. The head of a louse does not look like a person’s face that much, so a little image manipulation to make the antennae smaller and the face more human in general was needed. Finally “hands” had to be fabricated from various parts of the louse and added to the image.The next image in the campaign was of a tobacco smuggling “parasite”.This time I acquired three different types of mosquito, Aedes Aegypti, Anopheles and Culex, the reason being a mosquito’s head looks nothing like a human’s, so a lot of image manipulation was needed by using bits from all three types of mosquito to make it look recognisable as a person. Hands again were created from parts of the mosquitos and retouched onto the final image.All the images in the campaign had to have a grainy, dirty, tobacco stained colour pallet to them, so all were treated heavily to achieve the final look.